I've been working hard getting tiles entered into the database.  I'm currently about 31% finished with this task if I include all of the asteroid tiles.

Jake the artist is hard at work as well, and has been teasing me with some of the new terran images for the star system map.  He's also going to be sending me several hundred new planet tiles, so they'll have to be entered in the database as well.

The planet editor is almost finished, and I've been creating a few more planets to try it out.  I still haven't decided on a maximum planet size yet.  I'm thinking of maybe 25x25 squares, which would give the largest planets 625 squares to explore.  I may go as high as 30x30, but probably not much more than that.
at 9:36 PM No comments:

I'm still moving right along on the planet terrain rewrite.  I've got all of the Terran planet squares entered and have made progress on most of the other planet types.  This should allow me to redo the asteroid code fairly quickly, since it's all very similar.

Unfortunately, while digging around in the code to allow me to create some of the planet types I never did in the past, I realized how old and clunky a few parts of the code to display star systems is.  This was some of the first code I wrote for the game and it's all completely hacked together with baling wire and superglue.  It won't be nearly as big of a project, but some refactoring will have to be done there as well.

I also woke up my main artist, who has apparently gone and created himself an Internet radio station featuring Goth Metal.  He's working on some supplemental planet tiles and is creating me a whole new set of system object tiles.
at 9:45 PM No comments:

Development went down into major chaos over the last few days as I replaced my PC with a Mac Mini   and switched my IDE over to NetBeans with Safari as my main test browser.  So far things are going pretty smooth, although the Firebug plugin seems a little wonky in Safari.

I've decided to not even attempt to make the game work with Internet Explorer.  I realize this may cut out part of my audience, but oh well.  I'm just so fucking tired of dealing with Windows.  I'm forced to do it at work, so I'm damn sure not going to expose myself to that crap at home when I don't have to.

I cleaned up some code on the Planet display screen tonight to use the new tile system and some small gui improvements.

I've also been slowly adding more tiles to the database.  I'm probably averaging about 100 a day, so in a month I may be finished.  Then I'll have to create default descriptions for each.  The fun never ends.  Heh.
at 10:30 PM No comments:

So I've finished off the majority of the code rewrite.  The game now correctly displays planet squares in the new system in all three screens that show them.  Now I just need to add a few more things to the planet editor and test it a bit.

I've still got thousands of image tiles to go through and get into the database, so that's still going to be a real chore.  I can just dribble those in for now though.

I also realized that I've got to do all of this again with the Asteroid Squares now.  Sigh.
at 10:29 PM No comments:

More major progress tonight.  I deleted all of the planet square data and now have the planet editor displaying the planets tiles under the new system.  Below is a screenshot of an ice planet under construction.  Now I just need to make sure the rest of the places in the game that display planet surfaces get changed over and one of the major legs of this rewrite will be complete.

I still have a TON of database work to do to get all of the planet tile graphics into the system, but there is a slight hint of a light at the end of the tunnel. 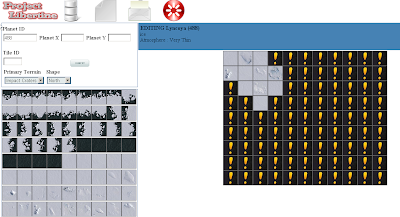