I set out to just add a simple feature on the ship screen to show what a square with a purple outline meant. The purple outline means you've done a mineral scan on that square and there was nothing on the screen to indicate what it meant to the player, so I was just going to add a purple square off to the side and put a label that said "PSMS Peformed" next to it.

I realized that's not really exactly what I wanted to do, so I was off down a rabbit hole adding new functionality before I knew it. I already had a popup area that showed when you were over a colony on the planet, so I wanted that same popup to show the results of lack thereof for a PSMS (Planet Square Mineral Scan). While I was doing this I realized I had designed the database tables badly with too much overlapping information, so I ended up dropping several columns and adding some to other tables and then had to go back through all the other screens to see what that broke.

In the end, when you scroll over a planet square with the cursor that has been scanned, the information will now show up, as seen below. I think it worked out much better than just putting a purple square on the screen and then you having to go to another screen to see what was up. 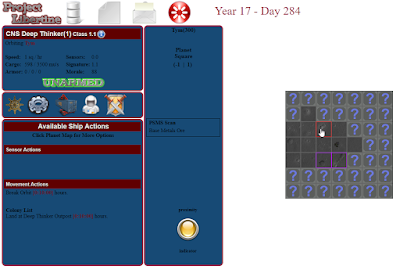 Not many major coding changes this weekend so far. I've mostly been killing some more bugs and adding a few minor features I'd neglected previously like sending a report when your upgrade your ship and also adding it to the ship log.

I did finally figure out how I'm going to make Ship Morale have some meaning in the game. I don't want to take away someone's ship just because morale has finally hit rock bottom, but as the ship's morale heads downwards it will affect the crew's efficiency so tasks will take longer. It will probably be in brackets instead of just using the morale as a percentage multiplier. So once the (1 - 100) morale goes below say, 75, things will start taking longer. Maybe a 10% slow down at that point. Once it hits zero you can probably look at things taking double the normal amount of time.

Morale will still have a major effect on combat, and you probably don't want to try Jumping to a new star system with a ship whose morale is in the gutter. It's not good to be sloppy when entering jump space.

Granting Shore Leave at a colony or space station will improve morale tremendously on a ship, although it will be a 12 hour or so action and cost the ship money, most of which will go to the colony owner, depending on the level of the Entertainment district at the colony. Just letting the crew blow off some steam at a mining outpost with no Entertainment district will help some, but some of the larger colonies will have higher level amenities that will top that morale quickly.
at 3:05 AM No comments: