I'm still working on the Ship Weapons page.  I've got it so you can install weapons from cargo into available turrets, and now I'm doing some work on items in general to actually require time to elapse while items are being transferred from cargo into a turret or back to cargo.  This will also let me finish up the cargo transfers and means a lot of the work will already be done once I start coding up the Market buys and sells.  Some of the same code will also be used once I start working on Manufacturing, so this is all significant progress that I'm making.
at 11:05 PM No comments:

I created the first weapons in the game yesterday, which were a few Beam Lasers.  Sometime later today they should be installed on a starship for the first time.

I was going to just develop the starship combat first for 1 vs. 1, but I've decided to go ahead and have it account for other ships joining in since it would involve a lot of rework later on.  This means I'll have to do a little more pre-work before I get started on the combat, but should be much more satisfying when it's done.

Things are moving along nicely in the game recently.  I added functionality to place turrets on ships recently.  A ship has to be at least class 1.0 to have a hardpoint, and turrets can be placed on the hardpoints.  There will be different kinds of turrets, like Beam Weapon and Missile.  There will also be larger weapon systems that will require multiple hardpoints.  So a fighter bay may take 3 hardpoints, while a spinal mount may take five.

A ship will have one hardpoint for each full class it is.  So a 2.0 will have two hardpoints.  A 3.5 will have three, etc.

All of this is slowly leading up to me being able to get the combat system going.  I've also been working on the login page, and have commissioned some artwork from Evolluisionist on deviantART.  You can see the preliminary artwork and the recent redesign on the login page at www.projectlibertine.com.
at 2:13 AM No comments:

One of the things I want to emphasize in the game is character development for the ship crews.  In order to do this I've started implementing personnel "events" in the game.  This will allow you to see a list of important events that have occurred to that character during play.  It will track things like being hired, fired, participating in a battle, discovering a new star system, etc.  This will also allow me to implement a sort of badge system, so characters can earn medals like battle stars for combat or a ribbon for making your 100th jump.  I plan to do something similar for ships as well.
at 7:44 AM No comments:

I got bored with all the graphics stuff, so for the last day or so I've been wandering off doing some other things.  I fixed some bugs and I added the ability for a user to change their language.  Right now the only options are English and German, and only a few labels are changed to German, but I thought I might as well do some of it as I go along so it won't be a huge chore somewhere down the road.  I'm not sure what other languages I'll translate it to, but I would imagine French and Italian may be forthcoming.  I'd love to translate it to Chinese, but it's such a different language than what I'm used to that the task is daunting to me.  At least with German I can almost follow along.

I also took another look at ship combat, but this made me realize that I'm really not ready to start writing the combat code since I haven't even added weapons to the game and don't have the ability for players to set some basic tactics for their ships.  Eventually you'll be able to tell your ship what distance it should try to maintain to the target, or what round to flee on if you want to stay and fight for a few rounds then try to escape.  I've got the framework or the Ship Combat Orders up, and once I create a few lasers I can start making the combat more complex.  The combat system is probably the one part of the game that is going to require the most work, even from deciding exactly how it's going to work.
at 8:17 PM No comments:

So I was out of town attending the SERA Cave Carnival in Alabama most of the weekend, but tonight I worked on the star system editor and got it to the point where the majority of star graphics are added automatically when you create a new star.  This is a big improvement for me since I was previously forced to manually edit the database to add stars that take up more than one space square like B, A, F, and G types.

O type stars and Red Giants are not part of the random star generation code, so I'll still have to specify those but should have the system adding the graphics automatically soon.

Here's a screen shot of an A type star I created in a new star system tonight. 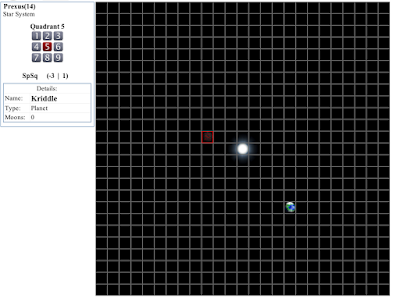