I made a decision today to drop Radiation as an overall stat for a planet, moon, or asteroid field. I think it will be better implemented as an individual "hazard" for a specific square of those objects. So if you're scanning a planet square you may discover while reading the report from your science officer that the square you just scanned has "higher than normal radiation levels" or somesuch techno-babble. This means more work for the world builder (me), but I think it will be better in the long run.
at 2:36 PM No comments:

As I peel the layers of the onion back while working on the colony design and coding, I tend to come to a point where I need to go and work on something else in order to fully develop what I've been working on.

I recently came to this point with colony population growth. I need to figure out what the survivability factor is for a given colony on a given planet, and I realized I never finished putting in all the descriptors in for planets. I had only added Atmosphere type and neglected to add Gravity Rating, Radiation Rating, Temperature, and Tectonic Activity. I may leave that last one out from the general planet description and just add tectonics to certain locations on the planet for the sake of simplicity. I'm also going to add a rating for the amount of sunlight or luminosity that is reaching the planet's surface, but that will be a calculated value based on the distance from the sun and the atmosphere and will require more research.

I did some research looking for planetary temperature ratings systems and found this site:

which offered a great system for rating the temperature of planets that is very authentic and geeky at the same time. So I lifted it whole hog and added it to the game.

Here's a screenshot of what I have so far. I still need to add the other values and I'm toying with the idea of doing a redesign of this screen where I move the top info container over to the left side. 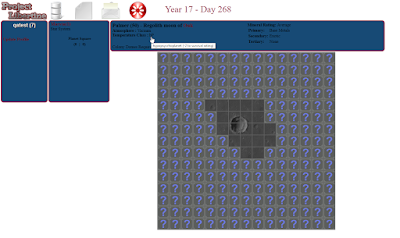 Lots of bug killing going on the last day or so. It turns out that when you start actually testing your game like you were a player you find all kinds of problems. Who knew?

I recently created a new mining outpost and transferred some human colonists to it and it has generated zero ore, so there's something I've missed in the outpost setup or the mining code.

Still, there's some good progress going on, even if my Trello board is starting to get pretty crowded with work to do.
at 1:24 AM No comments:

Still working primarily on colonies, and making progress and killing a lot of bugs along the way. I found I had designed and coded myself into a bit of a corner at one point last week, but after talking it over with a friend I finally came to a decision.

I want there to be a clear advantage to building an "Open" colony on a world that will allow Human Colonists to live without very much life support. So an Open Colony will be cheaper to construct in materials and will allow 5 Module slots per level. A Domed Colony or a Space Station will be more expensive to construct and will only allow 4 Modules per level.

The problem I ran into was that I had Five basic modules that I wanted to be in a mining outpost: Mining Module, Warehouse Module, Habitation Module, Nuclear Reactor Module, and a Landing Pad. I needed to get this down to four modules if anyone wanted to build on an airless moon or an asteroid, so I decided to get rid of the Landing Pad. This means that loading/unloading will automatically take two times as long at a colony without a Landing Pad, but it also makes some sense in game turns as well. A newly built Open outpost will also not have a landing pad, but there will already be an empty slot where one can be built if so desired.

Here's a picture of the first Domed Outpost that was built entirely within the game by a landed ship. No database manipulation was required.

The sentient population of colonies is now increasing weekly based on the fecundity rating of the species. Currently I only have two types of "species" in the game: Human Colonists and Indentured Humans for the more evil players. There will be more to come.

Human colonists have a fecundity rating of 1, while their indentured brethren are rated at 1.2 for now. This is not to make an advantage for unscrupulous colony owners, but will probably cause them to have to jump through more hoops to keep the unwilling workers happier and under control.

Currently a colony checks each population group at exactly one week intervals to see what the fecundity rate is for that group of species and whether they should grow or shrink. The rate can be affected by morale, overcrowding (which also affects morale), and even certain items that have been made available to the population.

By way of explanation for this last feature, each colony governor will be able to Assign certain items as being given to the colony population at large. Each item can have different effects on different species. So an aphrodisiac for Human colonists may raise their fecundity rating, but may lower the morale of another alien species group at the colony, so can have both good and bad consequences.

I'm excited to be moving into the time where morale of a colony population will start to have a real effect in the game. I'm looking forward to creating new items and tech for these purposes.
at 10:05 PM No comments:

I got a lot of coding done today on colonies. First I killed some bugs related to mining and the onscreen updating of the current stockpile. I left one variable in an equation that was doubling the rate calculated on the server versus what was being displayed by the player. That one took a while to find.

After that I've implemented the Priority rating for each colony module and made some updates to the Colony Overview screen that is the first screen a player will see when they click on their colony. The screenshot below is what it looks like in its current state. I've still got to add some more bells and whistles to the screen, but the button in the Man Hours section is fully functional and will appear when there are surplus man hours available and not every module has enough man hours assigned to it.

If the manhours available ever drop below what is the current total for all modules, the game will automatically call a similar method that will run in reverse and remove man hours from each module until everything is rebalanced.

Power allocation will work in exactly the same way, and is the next thing on the list to be worked on after some more man hour tweaks. 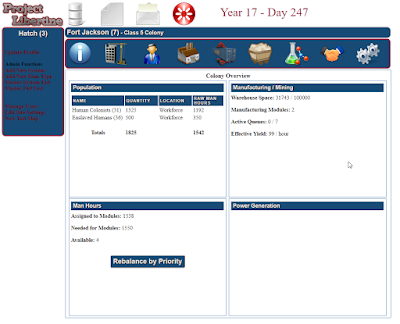 More colony work going on, and a little bit of work on some admin tools. I can now assign man hours to individual colony modules, and the lack of enough man hours for your Mining Module can now seriously cut into your hourly yield. Each species has a base amount of man hours per individual, and this will eventually be affected by the morale.

Because the amount of man hours, and eventually, power, at a colony can fluctuate, I'm working on coming up with a way for the player to prioritize which modules will lose labor or power first in case there is not enough. For now I think I'll let the player assign a value from 1 to 10 for each module, with the initial default being 1.

Then, when there is not enough labor or power to go around, the game will look at priority 10 modules first to make cuts, then work its way down to priority 1 last. In case of a tie, priority will go to the older module.

I'm also thinking about having morale being calculated for each group of species at a colony. So giving items to the colonists that makes the 1000 human colonists happy might make the 4000 Wookies unhappy and lead to bad things.