It's been a while since I worked on the game, but I've been getting back to work the last few days. The first few days back always involve me going through the game as it currently exists and fixing some small bugs and adjusting a few things.

I've settled down to working on colonies for now, mainly the concept of Man Hours and how they are used throughout the colony. Here's a quick overview of how it will work.

Each sentient lifeform in the colony will be totaled up. This will not include named characters. Each species has a value for baseManHours. For Human Colonists, this is currently set to 0.9, although it won't likely stay at that number.

So if you have 1000 Human Colonists, they would currently provide 1000*0.9 = 900 Raw Man Hours that could be used to run colony modules or factory queues or mining operations. The final number will also eventually be multiplied by Colony Morale which could increase or decrease the final number. There will also likely be technology or special abilities that will influence these numbers as well.

Morale will be fairly complicated and will include such things as colony type and location, how often the colony is attacked, goods and luxury items given to the colonists, and also tech and special abilities to some extent. Morale will be allowed to go from 0.01 to over 1.0, so it can vastly help or hinder how efficient your colony is.

Below is a screenshot of some of the early work on colony population, showing the different Man Hours generated by Human Colonists vs. Enslaved Humans. 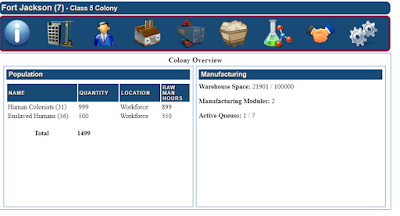