I've been working on a lot of stuff recently and still making good progress. What I've actually been working on has been all over the place, but the last day or so has mostly been concentrated on colonies.

I decided to rename Colony Modules to Colony Complexes to better differentiate them from Ship Modules. That was more involved than I thought and along the way I've finally gotten around to implementing some things that haven't been there yet.

In the screenshot you see a colony that has two Manufacturing Complexes. One is level 5 and the other is Level 2, so this colony would be able to produce 7 things at once. Unfortunately, this colony does not have enough colonists to produce enough manhours, so the second complex is operating at a much lower efficiency. So each one is building the same item, but the second one will take much longer to do so. 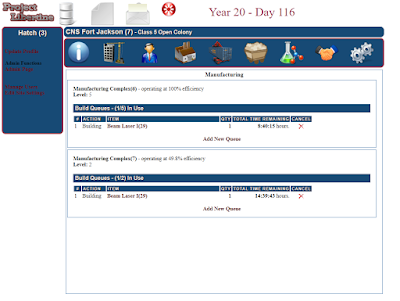 Available manhours at colony will be a fairly complicated affair, and will depend on what complexes have been built, where the colony was built, morale boosting items given to the colonists, and even what type of colonists are present. It should present an interesting challenge to colony governors.
at 9:58 PM