Sorry for the dearth of updates recently. I've been a little busy with other things but I have managed to do some coding almost every day recently. The vast majority of the recent work has been on colonies and colony management. The biggest deal was implementing colony morale and having it affect things like the amount of manhours available to run the complexes. If your people aren't happy, they don't work as much, so you may not have enough labor to go around.

I've also been shifting some screens around and trying to consolidate them to provide more useful information about the colony to the player, as can be seen in the following screenshot. 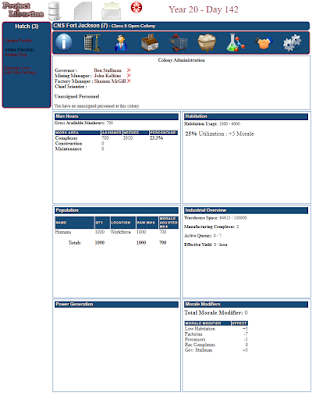 Right now Morale modifiers are only being affected by certain complexes and the Management skill of the Governor of the colony. As you can see, each level of Mining, Factory, or Processing complex will reduce morale. Eventually I will also add a negative multiplier for having more than one type of these complexes. So if you have Factories and Processors, you will have a penalty. This is to encourage colonies to specialize and not try to do everything at the same colony.

Eventually there will be "Effects" that can also alter colony morale, such as giving them certain items or if certain events take place. So if you give them a Euphoria drug then it may give you a week of +5 morale, as long as you've given them enough for the population.

I've also started buying more artwork from a talented artist I hooked up with in Argentina. I'm not ready to show it off yet, but I think it's really going to make the colonies look good once he's done.
at 11:27 PM